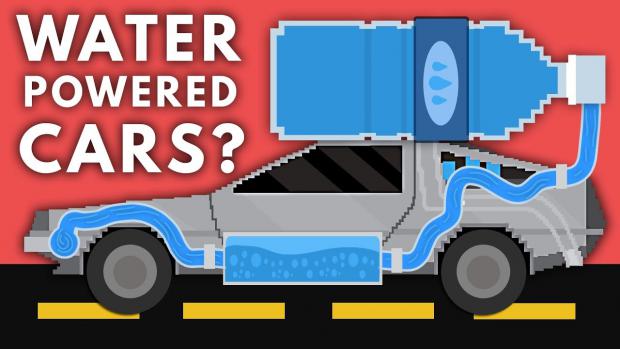 Lately, I've been writing about the technocrats' plan to radically lower energy production and use, worldwide. [1]

This program, hidden behind all sorts of propaganda about energy-sharing, environmental justice, and climate change, is a method for visiting destruction on humanity.

Aside from oil, gas, coal, and nuclear, alternatives exist. The technocrats' preference for solar and wind power—two methods that are presently incapable of replacing traditional energy sources—shouldn't make people think those are the only options.

In my previous article, I described John F Kennedy's vision for ocean-water turbines [2] [2a] [2b]—the huge Passamaquoddy Project—which he advanced and championed up to his death in 1963.

Here, I ask the question, can cars run on water?

I present answers from various sources.

Popular Mechanics (2008): "There is energy in water. Chemically, it's locked up in the atomic bonds between the hydrogen and oxygen atoms. When the hydrogen and oxygen combine, whether it's in a fuel cell, internal combustion engine running on hydrogen, or a jury-rigged pickup truck with an electrolysis cell in the bed, there's energy left over in the form of heat or electrons. That's converted to mechanical energy by the pistons and crankshaft or electrical motors to move the vehicle."

"Problem: It takes exactly the same amount of energy to pry those hydrogen and oxygen atoms apart inside the electrolysis cell as you get back when they recombine inside the fuel cell. The laws of thermodynamics haven't changed, in spite of any hype you read on some blog or news aggregator. Subtract the losses to heat in the engine and alternator and electrolysis cell, and you're losing energy, not gaining it–period."