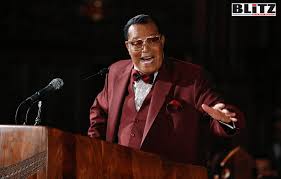 Videos of the convention, which was held for the Nation of Islam's annual Saviours' Day, are posted on the group's Twitter, Facebook and YouTube pages, despite the social media companies' policies against vaccine-related misinformation.

"By rushing so fast to get something out, bypassing normal steps in a true vaccine, now God is going to turn your vaccine into death in a hurry," Farrakhan said at the end of a plenary session held on Saturday.

"It is death itself, created by what you call 'Warp Speed,'" Farrakhan also said, referring to the U.S. government's project, Operation Warp Speed, to develop a vaccine for the virus.

Farrakhan also took aim at Dr. Anthony Fauci, the U.S. government's top epidemiologist, saying that he has sought to make money on the vaccine, which he referred to as a "vial of death."

Farrakhan, 87, falsely accused Fauci last year of plotting with Bill Gates to use a coronavirus vaccine to "depopulate the Earth."