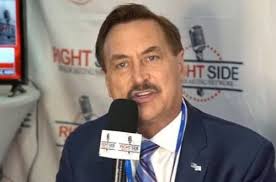 MyPillow CEO Mike Lindell's microphone was MUTED on Sunday after he began warning Americans about taking the COVID-19 vaccine during an interview at CPAC.

100 Percent Fed Up reports – Mike Lindell spoke with Liz Willis, a host on the conservative YouTube channel Right Side Broadcasting Network (RSBN). He began speaking on his concerns around the China Coronavirus vaccine, only to have his mic cut seconds later…

"In Israel right now, the prime minister on down, we don't know what happened, but obviously, he congratulated Biden, but after that, we got a little suspect," Lindell stated. "Right now with the vaccine over there, they are making the whole country take it so you can't go in shopping malls, you wouldn't be able to get a job, and if this happens, it the start for the world, the worst thing that could happen to this world."

"I'm telling you with the vaccine… if you get a vaccine, which is only 95% effective, they say, then they want you to do another one in six months, six months. Well, I'm telling you when you get that, what do you care what someone else does, if that person wants to come to a mall and they don't want to get a vaccine. This is our bodies, this is 'mark of the beast' stuff," the MyPillow CEO continued.