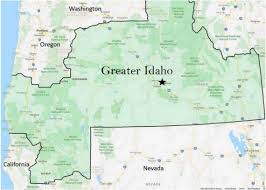 Baker, Grant, Lake, Malheur and Sherman counties will put the initiative to alter the state borders to the ballot, according to Mike McCarter, the leader of Move Oregon's Border.

"Oregon is a powder keg because counties that belong in a red-state like Idaho are ruled by Portlanders," McCarter said, adding that, "this state protects Antifa arsonists, not normal Oregonians, it prioritizes one race above another for vaccines and program money and in the school curriculum, and it prioritizes Willamette Valley above rural Oregon."

McCarter asserted that an initiative for several counties to join Idaho is not secession, since it does not intend to interfere with the balance of power in the US Senate or change the number of states in the country.

"We're not trying to change a single thing with Idaho," McCarter said of the Oregon counties, "We just want to come alongside them and maintain the values."