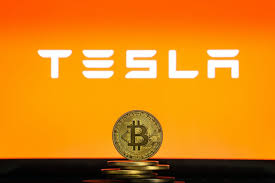 Tesla's share price is now directly linked to the price of bitcoin after Elon Musk's company invested $1.5 billion into the volatile cryptocurrency, according to Daniel Ives, an analyst at Wedbush.

"Musk is now tied to the bitcoin story in the eyes of the Street and although Tesla made a billion paper profit in its first month owning the digital gold, it comes with added risk, as seen this week," Ives told CNBC via email on Tuesday.

He added: "With Tesla diving into the deep end of the pool on bitcoin, Musk runs the risk that this side show can overshadow the fundamental EV (electric vehicle) vision in the near term for investors."

Despite some concerns, Ives still believes that bitcoin is a "smart move at the right time for Tesla."

Ives estimated on Monday that Tesla has already made over $1 billion off its investment in the cryptocurrency.

"On the downside it's playing with firecrackers and risks and volatility are added to the Tesla story," Ives said.