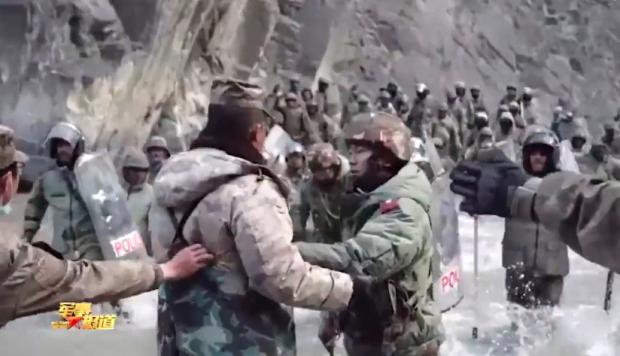 China has released a video which reportedly shows its border clash with Indian troops last June after Beijing admitted that four of its soldiers were killed in the fatal high-mountain fight.

The footage, aired by Beijing's state broadcaster CCTV, is said to capture the bloody hand-to-hand combat between Chinese and Indian forces at the Galwan River valley, which also resulted in the deaths of 20 Indian servicemen.

The official channel claimed the clip showed an Indian army 'several times the size of the Chinese side' launching a violent revenge attack after a Chinese commander had tried to solve the two nations' border disputes through peaceful talks.

The battle took place after 'the foreign military openly violated the consensus reached with us and blatantly crossed the line to provoke [us],' according to the report broadcast by CCTV's military channel.

Chinese military revealed on Friday that four of its soldiers were killed in a border clash, the first time Beijing has publicly conceded its side suffered casualties in the deadliest incident between the Asian neighbours in nearly 45 years.

The announcement, coming more than six months after the bloody hand-to-hand fighting, should help global audiences 'understand the truth and the right and wrong of the incident,' Chinese Foreign Ministry spokesperson Hua Chunying said.

Yet the delay also appeared to reflect China's deep culture of military secrecy, as well as concerns over the potential domestic and international fallout from the bloodshed.