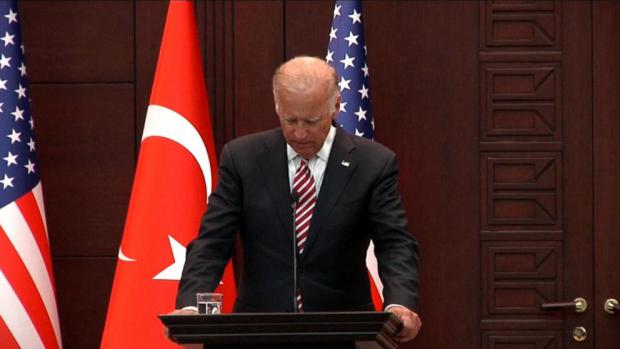 Turkey's President Recep Tayyip Erdogan is once again blasting what he's deemed US support of "terrorists" after a major incident in which Kurdish militants reportedly executed 13 kidnapped Turks in northern Iraq. Ankara on Monday summoned the US ambassador to express outrage at the lukewarm American statement on the killings which appeared to question the credibility of the Turkish claims.

"The United States said it stood by fellow NATO member Turkey and that it condemned the killings if it was confirmed that responsibility lay with the PKK," according to a Reuters summation of the State Department statement. Erdogan and top officials were outraged, with the president in a speech before AK Party supporters calling the US official stance "a joke" and "ridiculous".

"Now there is a statement made by the United States. It's a joke. Were you not supposed to stand against the PKK, the YPG? You clearly support them and stand behind them," Erdogan said, enraged by what's being perceived as US skepticism over Turkey's version of events.

The summary execution allegation against the outlawed Kurdistan Workers Party (PKK) was leveled on Sunday, and included claims the PKK had killed Turkish military and police which had been previously captured. Turkish officials described some of its forces were captured on Feb.10 during an operation against Kurdish militants in which 48 PKK members were killed.

Below is the US statement that Erdogan accused of being intentionally weak:

"We stand with our NATO Ally Turkey and extend our condolences to the families of those lost in the recent fighting. The United States deplores the death of Turkish citizens in the Kurdistan Region of Iraq," U.S. State Department spokesperson Ned Price said in a statement.

Price said that if reports that the PKK was responsible were confirmed, they "condemn this action in the strongest possible terms."