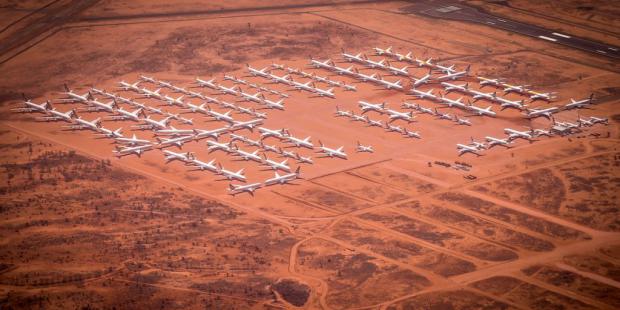 Billions of dollars worth of disused aircraft are being stored row after row in the US as Covid-19 continues to wreak havoc on the aviation industry.

Photographer Jassen Todorov traveled around the country to capture the incredible sight of the grounded planes lined up in airfields.

Todorov, who is himself a pilot, shot images of the 309th Maintenance and Regeneration Group in Arizona where 4,000 aircraft are being stored.

He also visited the Southern California Logicistics airport and the San Bernadio and Mojave airports in California and Pinal county Airpark, Arizona.

The images bring the aviation industry's troubles into sharp focus due to the pandemic.

The grounding of the Boeing 737 MAX planes has also led to many craft gathering dust in airfields.

Many airlines say they are fighting for survival with the pandemic the worst crisis to ever hit the industry.

Huge reductions in passenger numbers caused by a slump in demand and international travel restrictions have left many airlines on the brink.

According to the Center for Avition, the number of passenger jets in service at the end of 2020 across the world had returned to 2008 levels.

Passenger numbers were the lowest since 2003 last year, while the average distance traveled by passengers had slumped to its lowest number since 1999.