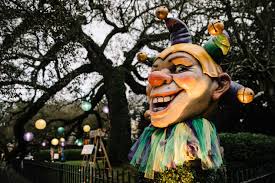 Megan Boudreaux was feeling down three months ago after she learned that New Orleans wasn't going to issue Mardi Gras parade permits for 2021 because of the pandemic.

The annual holiday wouldn't be the same, she said, without the elaborate floats made months in advance of Fat Tuesday's 50-plus parades.

"I decided, 'Well, okay then, I'm going to decorate my house instead, pull some beads out of the attic and throw them at the neighbors," said Boudreaux, 38, who works as an insurance agent in New Orleans.

She posted her idea on Twitter, thinking that she might inspire a few of her friends to do the same for this year's Mardi Gras on Feb. 16.

"Last year, I made a bunch of origami flowers that kiddo and I passed out to people while we wandered around the French Quarter," Boudreaux wrote on Nov. 17. "Tempted to continue the theme, turn the whole house into a flower float and pass out flowers to the neighbors while I drink all day."