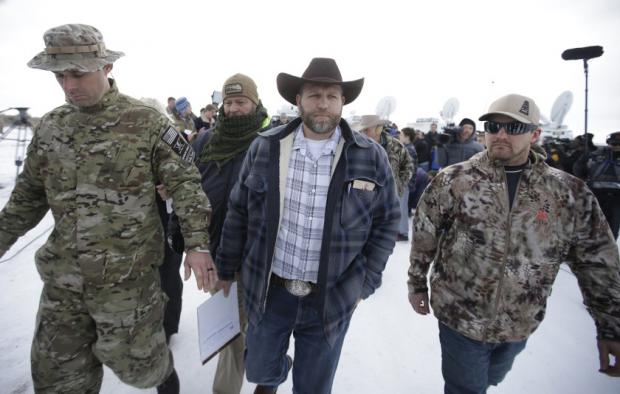 Bundy, who led the 2016 armed occupation of the Malheur National Wildlife Refuge, has launched a militia network that experts say has strong overlap with right-wing extremists

The two dozen demonstrators pressed against the emergency-room doors, screaming to be let in.

"Show us the law!" they chanted.

"Let Grandma out!" one shouted.

They had descended on Legacy Salmon Creek Medical Center in Vancouver, Wash., the evening of Jan. 29 to protest the quarantine of Gayle Meyer, a 74-year-old patient who had refused to take a test for the coronavirus.

Police in riot gear guarded entrances as the activists — who authorities said were armed — insisted that Meyer was being held against her will, a claim the hospital denied.

Meyer's 49-year-old daughter, Satin, an anti-mask activist licensed as her caregiver, had summoned the demonstrators, foot soldiers in a rapidly expanding network called People's Rights. With the tap of a thumb on a smartphone, members can call a militia like they'd call an Uber and stage a protest within minutes.

Behind the organization is a familiar name: Ammon Bundy.

He is best known as the leader of the 2016 occupation of the Malheur National Wildlife Refuge in Oregon — a deadly 41-day standoff between federal agents and militants who rejected the federal government's authority over public lands across the West.

Now Bundy has seized on the backlash against coronavirus restrictions as an opportunity to start a new movement.