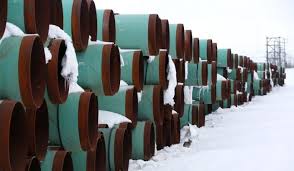 "Your decision will result in devastating damage to many of our states and local communities. Even those states outside the path of the Keystone XL pipeline—indeed all Americans—will suffer serious, detrimental consequences," the attorneys general wrote in the letter.

On his first day in office, Biden revoked former President Trump's 2019 presidential permit for the Keystone XL oil pipeline, construction of which has been halted and resumed repeatedly over several administrations.

The pipeline is planned to span 1,700 miles from Alberta to the Texas Gulf Coast when completed, transporting about 800,000 barrels of oil per day through Montana, South Dakota, Nebraska, Kansas, and Oklahoma.

Montana Attorney General Austin Knudsen led the coalition of attorneys general in sending Biden the letter. In Montana, the pipeline will cover 285 miles and six counties.

"In Montana for instance, killing Keystone XL will likely cost the state approximately $58 million in annual tax revenue. Montana will lose the benefits of future easements and leases, and several local counties will lose their single-biggest property taxpayer. The loss of Keystone XL's economic activity and tax revenues are especially devastating as five of the six impacted counties are designated high-poverty areas," Knudsen led the attorneys general in writing.