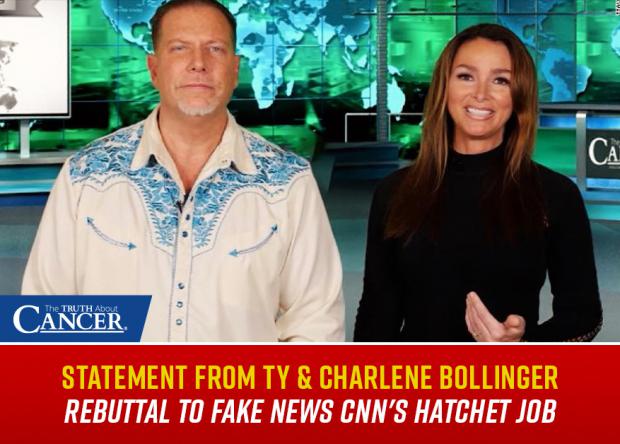 (Natural News) The recent baseless CNN attack on us is a fake news media hit job of epic proportions which lacks all journalistic ethics and impartiality. CNN's attack demonstrates that it is not just questioning of the alleged safety of vaccines but "free speech itself."

(Article by Ty and Charlene Bollinger republished from TheTruthAboutCancer.com)

What is indisputable (but not mentioned in CNN's biased report) is that the COVID vaccines are being used under an Emergency Use Authorization (EUA) by the FDA. An EUA makes the vaccine available for "public health emergencies," but also means that the FDA has not yet compiled all the evidence and clinical data that it would examine before fully approving a drug for public distribution and use. When combined with the Department of Health and Human Services (DHHS) Declaration of February 4, 2020 and the invocation of the PREP Act, the vaccine manufacturers are immune from legal liability (i.e., they cannot be sued for money damages in court) for losses relating to the administration or use of covered countermeasures (like vaccines) against COVID-19.

Despite over 500 reported deaths from the COVID vaccine (according to the CDC's VAERS database), the CNN report insinuates that vaccines are undeniably "safe" while totally ignoring the indisputable $4.4 Billion paid out to Americans damaged by previous vaccinations – an amount paid by the DHHS itself! Congressman Adam Schiff once sponsored a House Resolution declaring that there have never been any deaths attributable to vaccinations. This is like claiming that the holocaust never happened –a repugnant and idiotic notion.

Along with thousands of cases of vaccine damage acknowledged by the US government, scientific research clearly indicates that there are legitimate concerns about the safety of vaccines on the CDC schedule, since most vaccines include adjuvants that can cause neurological damage, according to peer-reviewed scientific literature and Material Safety Data Sheets.