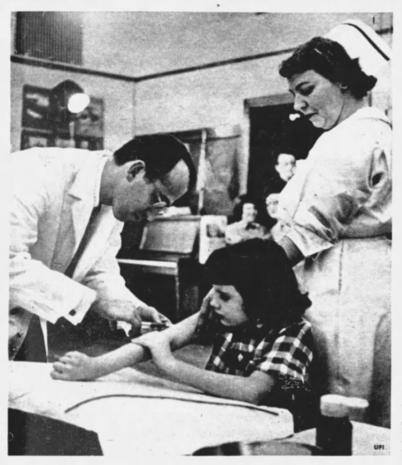 The following article was published in the Chicago Sunday Tribune on March 5th, 1961.

Do Salk Shots Really Prevent Polio? Should We Keep Using Salk Inoculations? How Good Are the New Oral Vaccines? Here Are the Facts:

BEHIND GLOWING reports of the Salk polio vaccine's success and even rosier predictions about the new, live, oral Sabin vaccine rages a storm of medical controversy that seldom reaches the ears of parents.

Many serious criticisms have been leveled at the Salk ' vaccine. These are now being acknowledged at least indirectly in announcements praising and promoting the new oral vaccines.

Yet all is not yet sweetness and accord among developers of the live, oral vaccines, either. At least three different types have been developed and according to their producers proved safe and effective in tests, chiefly in foreign countries, but also in the United States. One of these new oral vaccines, developed by Dr. Albert Sabin with National Foundation research funds, has been OK'd by the United States public health service for manufacture. But there are problems remaining to be solved in its production and, according to a committee of experts headed by Dr. Roderick Murray of the National Institute of Health, dangers to be considered in its use by the general public (altho it has been given to a reported 77 million Russians and to at least 300,000 Americans. Russian Prof. Mikhail Chumakov, who directed a two year program of inoculation with the Sabin vaccine, says he is convinced polio epidemics have been eliminated in the Soviet Union"). Licensing is not expected until this spring. Quantities of the vaccine are not expected to be available for community-wide use until November.

"Both 'live (Sabin) and 'killed' (Salk) polio-virus vaccines will be needed to combat poliomyelitis in the near future. United States public health officials 8 declared at the A. M. A. clinical meeting," the Journal of the American Medical association reported in December, 1960. "The new oral poliomyelitis vaccine developed by Dr. Albert Sabin and approved for future use in this country will not be the complete solution as far as can be predicted now, the public health service experts said."