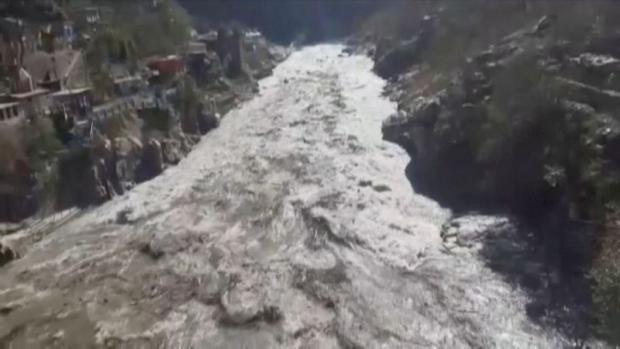 The incident occurred in the state of Uttarakhand, north of New Delhi, as a witness told Reuters a massive "wall of dust, rock, and water as an avalanche roared down the Dhauli Ganga river valley."

"It came very fast, there was no time to alert anyone," Sanjay Singh Rana, who lives on the upper reaches of the river in Raini village told Reuters by phone. "I felt that even we would be swept away."

Om Prakash, chief secretary of Uttarakhand, said the number of missing people is between 100 to 150, but the actual number has yet to be confirmed and could be much higher.

State police chief Ashok Kumar said at least 50 people working at the Rishiganga Hydroelectric Project were among the missing and feared dead. He said authorities evacuated other dams downstream.

Twitter users shared videos of the water rushing down the valley in Chamoli district, destroying everything in its path.

Scary visuals coming in from #Chamoli district in #Uttarakhand after a Glacier burst. Many missing and danger levels likely to cross in Srinagar, Rishikesh and Haridwar as well. Stay alert and stay safe everyone. pic.twitter.com/LkGXLYi1w8