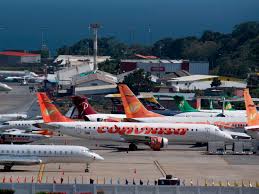 "[A]ll transactions and activities involving the Government of Venezuela prohibited by Executive Order (E.O.) 13884 of
August 5, 2019, as incorporated into the Venezuela Sanctions Regulations … that are ordinarily incident and necessary to operations or use of ports and airports in Venezuela are authorized," the U.S Treasury Department's Office of Foreign Assets Control wrote in a new General License issued to Venezuela on February 2.

Former U.S. President Donald Trump issued Executive Order 13884 on August 5, 2019, imposing a freeze on all Venezuelan government assets in the U.S. The sanctions were part of a larger campaign by the Trump administration to oust Venezuelan dictator Maduro, who the U.S. considers an illegitimate ruler. The August 2019 executive order banned U.S. companies from engaging in business dealings with the Venezuelan government.

"All property and interests in property of the Government of Venezuela that are in the United States … are blocked and may not be transferred, paid, exported, withdrawn, or otherwise dealt in," the order read.