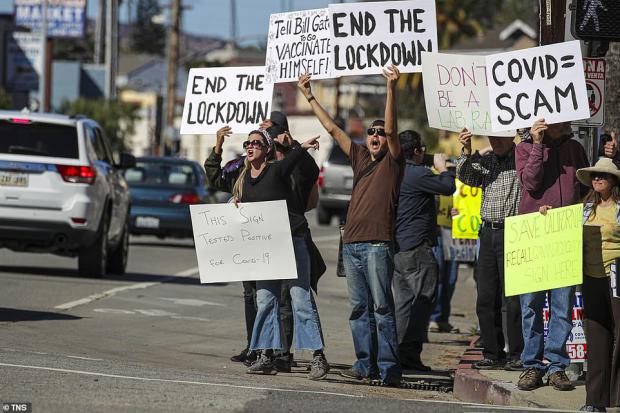 About 50 protesters, including members of anti-vaccine and far-right groups, gathered outside the entrance earlier this afternoon with picket signs decrying the vaccine and casting doubt on the pandemic, the Los Angeles Times reported.

Members of the crowd were seen holding up placards reading: 'COVID=SCAM', 'COERCION IS ILLEGAL', and 'Mark of the beast ahead', as motorists lined up at the vaccine site, one of the largest in the country.

The demonstration prompted officials to shut the entrance for an hour as precaution, stalling hundreds of people who had been waiting in line for hours.

One man who drove from his home in La Verne and had been waiting for an hour for his vaccination when the stadium's gates were closed, said activists were telling people the virus is fake and that vaccines are dangerous.

'This is completely wrong,' German Jaquez told the Times. 'I've been waiting for weeks to get an appointment. I am a dentist; I am taking a big risk being around patients. I want to be safe for my patients and for my family. The vaccine is the only way to beat the virus.'

'Fuck This Court': We Obtained Larry Flynt's FBI File and It's Pretty Wild