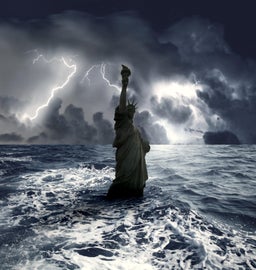 "This is an issue that all Democrats, Republicans, independents, Libertarians should be extremely concerned about, especially because we don't have to guess about where this goes or how this ends. What characteristics are we looking for as we are building this profile of a potential extremist, what are we talking about? Religious extremists, are we talking about Christians, evangelical Christians, what is a religious extremist? Is it somebody who is pro-life? [The proposed legislation could create] a very dangerous undermining of our civil liberties, our freedoms in our Constitution, and a targeting of almost half of the country."—Tulsi Gabbard, former Congresswoman

This is how it begins.

We are moving fast down that slippery slope to an authoritarian society in which the only opinions, ideas and speech expressed are the ones permitted by the government and its corporate cohorts.

In the wake of the Jan. 6 riots at the Capitol, "domestic terrorism" has become the new poster child for expanding the government's powers at the expense of civil liberties.

Of course, "domestic terrorist" is just the latest bull's eye phrase, to be used interchangeably with "anti-government," "extremist" and "terrorist," to describe anyone who might fall somewhere on a very broad spectrum of viewpoints that could be considered "dangerous."

Watch and see: we are all about to become enemies of the state.

In a déjà vu mirroring of the legislative fall-out from 9/11, and the ensuing build-up of the security state, there is a growing demand in certain sectors for the government to be given expanded powers to root out "domestic" terrorism, the Constitution be damned.

If this is a test of Joe Biden's worthiness to head up the American police state, he seems ready.

As part of his inaugural address, President Biden pledged to confront and defeat "a rise of political extremism, white supremacy, domestic terrorism." Biden has also asked the Director of National Intelligence to work with the FBI and the Department of Homeland Security in carrying out a "comprehensive threat assessment" of domestic terrorism. And then to keep the parallels going, there is the proposed Domestic Terrorism Prevention Act of 2021, introduced after the Jan. 6 riots, which aims to equip the government with "the tools to identify, monitor and thwart" those who could become radicalized to violence.

Don't blink or you'll miss the sleight of hand.