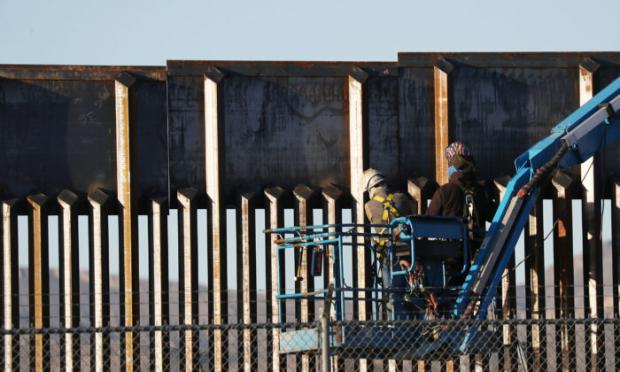 "I received notification that in accordance with President [Joe] Biden's executive order, all CPB contractors have now been formally notified by CBP Procurement to pause construction activities on CBP self-executed projects," Rep. Henry Cuellar (D-Texas) said in a statement. "While CBP cannot speak on behalf of the U.S. Department of Defense or U.S. Army Corps of Engineers (USACE), it is expected that DOD and USACE are undertaking parallel action on CBP-funded border wall projects that they are overseeing."

The Epoch Times has reached out to the Department of Homeland Security (DHS), which oversees the CBP, for comment about the wall construction halt.

The Trump administration had obtained billions of dollars in funding to construct the wall. Over the last four years, amid legal and congressional battles, about 450 miles of the wall were built along the border.

The wall stoppage on Tuesday complies with Biden's executive orders that were issued last week. The order halted projects where money was shifted from military projects to the border.

"This is a promising step in our work to halt construction of the ineffective and wasteful border wall and undo the damage that borderlands have experienced these past four years," Cueller continued in his statement. "However, our work continues. I remain steadfast in my commitment to working with the new administration until every border wall contract is terminated and all construction crews leave our border communities."