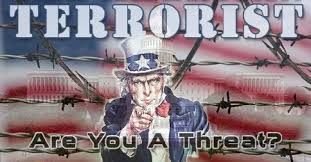 Are you a conservative, a libertarian, a Christian or a gun owner?  Are you opposed to abortion, globalism, Communism, illegal immigration, the United Nations or the New World Order?  Do you believe in conspiracy theories, do you believe that we are living in the "end times"?

If you answered yes to any of those questions, you are a "potential terrorist" according to official U.S. government documents.

At one time, the term "terrorist" was used very narrowly. The official definition of terrorism is "The use, or threat, of force with the intention of achieving a political goal." That makes it pretty clear what sort of people are covered, and for decades it worked well.  The government applied the label "terrorist" to people like Osama bin Laden and other Islamic jihadists.  But the Obama administration removed all references to Islam from terror training materials, and instead the term "terrorist" was applied to large groups of American citizens.