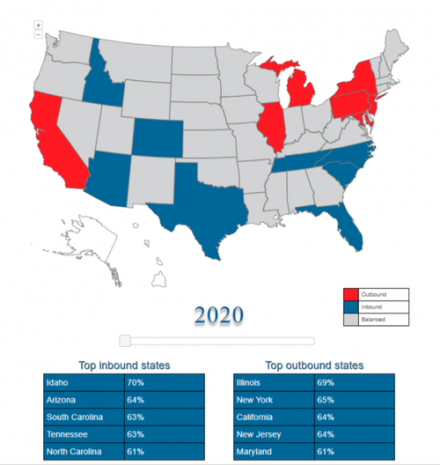 Forget about organizing or attending events. Weddings and funerals are too great a risk for spreading disease. And so on it goes.

But not everywhere is this the case. Many states are open, some are still shut, and many others fall somewhere in between. In some places in the United States, life feels almost normal.

Might we predict a shift in population from lockdown states to open states? According to North American Moving Services, Americans are still on the move at high rates that compare with 2019, despite or maybe because of all the edicts.

Consider the top five cities that people are leaving: New York, New York; Anaheim, California; San Diego, California; Chicago, Illinois; and Riverside, California. All five of those cities remain even to this day in stringent lockdowns. Indoor dining in California is not permitted, and will only be permitted in Chicago starting next week. New York is still in lockdown, despite Andrew Cuomo's call for the city to be reopened.

And where are people moving to? The top five destinations are: Phoenix, Arizona; Houston, Texas; Dallas, Texas; Atlanta, Georgia; and Denver, Colorado. Georgia was the first state to reopen following the panicked lockdowns of March 2020. Arizona and Texas opened in July.

The point is even clearer when you consider the states gaining and losing residents. Illinois, New York, and New Jersey – all with extreme stringencies – are losing residents faster than any other states. Northeastern states make up four out of the seven states, with California now fourth on the list. They are moving to Idaho, Arizona, Tennessee, South Carolina, and North Carolina.