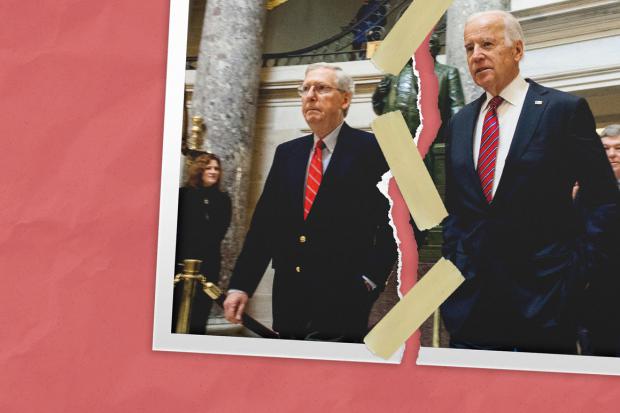 It was the winter of 2012. Then, as now, Democrats had just won a presidential election, had a narrow Senate majority, and Biden was earnestly proclaiming that the election would break the Republican "fever" of opposing the Democratic agenda.

A cascade of deadlines on December 31, 2012, set up a world economy-level battle known as the "fiscal cliff." Without any action by Congress, the next year would bring about $700 billion in combined tax hikes and budget cuts—extreme austerity measures that could cripple the recovering economy.

The Democratic Senate majority leader, Harry Reid, was willing to go over the cliff if McConnell didn't agree to tax increases for the highest earners, one of Democrats' signature campaign promises. Reid reasoned that if taxes were to rise automatically, McConnell would have to negotiate from a weakened position. Obama and Biden, however, feared an adverse reaction from the markets and a potential recession.