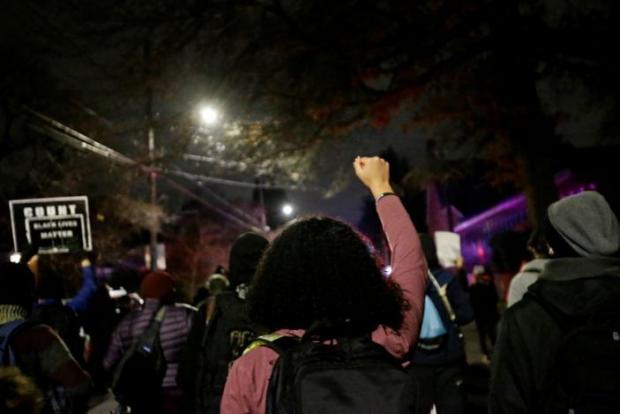 While some right-wing extremist groups had vowed to disrupt Biden's inauguration following the January 6 insurrection at the US Capitol, only scattered protests and violence emerged on Wednesday.

Federal police were forced to deploy tear gas in an attempt to disperse protesters who threw rocks and eggs at the Immigration and Customs Enforcement building in Portland, Oregon, late on Wednesday night.

They also burned American flags and spray-painted graffiti onto storefronts in Denver and Seattle, marched in Columbus, Ohio, and wielded shields and clubs while protesting in Sacramento.

In Portland, a crowd of up to 200 people gathered outside the ICE building in the South Waterfront section of the city where Federal Protective Services officers issued warnings on loudspeakers telling the demonstrators not to trespass on federal property, KGW-TV reported.

The ICE building has been the site of several violent clashes between demonstrators and federal police over the past year, particularly after the May 25 police-involved death of George Floyd in Minneapolis.

The clashes late on Wednesday escalated to the point where authorities needed to block off streets leading to the building.

The demonstrators have long demanded that ICE, the agency that has drawn the ire of pro-immigrant advocates for its aggressive enforcement of immigration laws, be abolished.