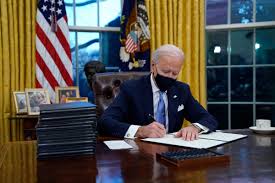 Biden has finished signing the 15 executive orders and two agency directives, per a White House official.

These include orders for the US to rejoin the WHO, the Paris Accord, a commitment to racia equality, a federal mask "challenge" mandate. Taking only a couple of minutes to speak to reporters in the Oval, Biden listed the three orders he would sign first and answered a question about a letter he was left by his predecessor Donald Trump, calling it "very generous."

Update (1745ET): Biden officially kicked off his one-day blitz of executive orders and executive actions, as expected, by signing them in front of an eager crowd of media, which has been following him around all day on his first day in office.

Biden kicked off the flurry of what are expected to be 17 or more individual executive action items by requiring masks on all federal grounds, while asking agencies to extend moratoriums on evictions and on federal student loan payments. He also signed an order overturning Trump's travel ban order.

Another order asks Americans to don face coverings for 100 days while reviving a global health unit in the National Security Council that was allowed to go dormant during the Trump administration to oversee America's pandemic preparedness and response. Biden will also begin to reverse steps taken by former President Trump to withdraw from the WHO by sending Dr. Fauci to speak at the international group's executive board meeting on Thursday.

"As you've heard [Biden] say, the pandemic will continue to get worse before it gets better," Jeff Zients, the incoming White House coronavirus czar, told reporters on a call previewing the administration's actions. "This is clearly a national emergency and we will treat it as such."

The first requires people to wear face masks in federal buildings, the second dedicates economic support to "underserved communities" and the third sees the US rejoin the Paris Climate Accord.https://t.co/MoBTXLUniG pic.twitter.com/D0yof3MnbY