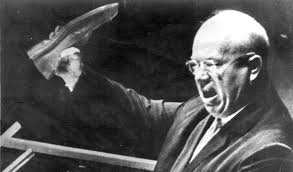 He was once the bloody-handed dictator of the former Soviet Union, back when Elvis was the King of Rock'n'Roll. He was ably portrayed by Bob "Eddie Valiant" Hoskins in 2001's Enemy at the Gates, about the Battle of Stalingrad. If you look him up in communist Wikipedia, they will try to persuade you that he was a saint, slightly to the right of Mother Theresa.

(Just now Wikipedia has its hand out, begging for contributions. I metaphorically spit in that hand, and would do it in person if I could.)

The point here is that, when Khruschev briefly visited the United States (he was disappointed because they wouldn't let him go to capitalist Disneyland) he famously predicted that the American people themselves would eventually raise the communist flag over their own country. Everybody at the time thought that was simply hilarious.

But Khruschev was right. Treason is the flavor of the season today. You and I presently find ourselves surrounded by idiots and cowards (they know who they are) who are perfectly willing to betray and abandon our republic to tyranny. Remember this: I know things about people; I do not believe that the Soviet communists (or the Nazis, for that matter) ever did anything of which the Democrat Party is incapable.

So what do I do, as our nation, and everthing that it once stood for, trembles on the lip of the garbage dump of history? I'm an old man in a wheelchair. What can I do? Mostly I sleep late. I play endless games of Solitaire. I binge-watch NCIS to help myself remember (Leroy Jethro Gibbs is the 21st century equivalent of Sherlock Holmes) that the world is rational and knowable and that the human mind is fully capable of figuring it out. When I feel like cartoons, I watch Ancient Aliens.