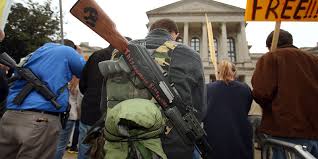 The stranger told me there were hundreds of thousands of them around the county in communications on the dark web, armed and ready. He told me something that blew my mind: they know who I am, and are willing to do whatever I tell them needs to be done. I just need to give the word.

Then and now I found that statement so hard to absorb it was difficult to respond. All I could think to tell him was that if they were willing to do what I said, then to spread the word that what I said was, "DO NOT GO VIOLENT. WE ARE PEACEFUL, WE ARE BETTER THAN THE OTHER SIDE, AND IF WE GO VIOLENT WE LOSE."

January 6 played out as it did. As things are building towards a crescendo at the moment, it is time I give a more reasoned response.  I ask that any militia and patriotic Americans who read this essay to please retransmit it far and wide, on Twitter, on DarkWeb, on morse code, on whatever means you use, in the next 24 hours.