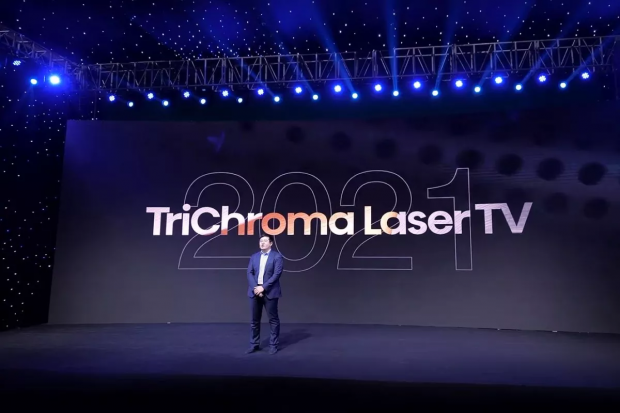 Laser TVs are nothing new of course, Hisense launched its first 100-inch Laser TV in 2014 and brought the first model to CES in 2015. In introducing the latest lineup, Dr. Xianrong Liu, chief scientist at Hisense Laser TV, said that over the last five years, Laser TVs have moved from a niche market to the mass market, gone from 2K to 4K, and stepped up from a one-color light source to three, while thrown image size has grown from 75 inches to 300.

Laser TVs are essentially ultra-short-throw laser projectors, and the Hisense range will use a new RGB laser light source architecture with separate lasers for each color light source that's described as a high-class DLP solution featuring double-area micromirrors for a 20 percent increase in brightness at the pixel level. As a result, projected images are claimed to be brighter than some big-screen TVs at 430 nits.

Thrown image capabilities in the 2021 lineup will range from 75 to 100 diagonal inches, and the units will come with AI smart cameras cooked in, to support such things as interactive home workouts and even family karaoke.

Your tech devices want to read your brain. What could go wrong?

5 Reasons Why You Shouldn't Use Zoom Anymore

The Top 5 Linux Courses for Developers, Cloud Engineers, and DevOps in 2021