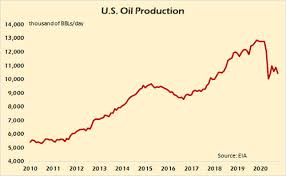 This is a bigger story than what happened on Capitol Hill on Wednesday because that was a continuation of a story whose end was already written.

Joe Biden will be President.

The Era of Trump is over.

Now that has far-reaching effects on a number of markets, including oil. But, again, we've known Biden was taking office, if we're being honest with ourselves, since election night when the civil war in the U.S. officially began.

So, we've known that Trump's push to become the controller of oil markets was coming to an end. We've also known since the Coronapocalypse that U.S. oil production had peaked and could only go down from there.

Yes Russia's production dropped by a similar amount, around 2 million barrels per day, averaging 10.27 millions of barrels per day in 2020. But the difference here is not in how much is produced but in what it costs to produce those barrels.

And not just any barrel, but the marginal barrel… the last barrel.