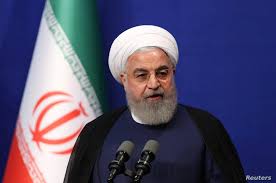 Rouhani's Wednesday speech, excerpts of which were posted in English on the Iranian presidential website, called Qasem Soleimani a ''martyr'' and ''moderate leader with tact.''

Soleimani, the leader of Iran's Quds Force — described by military specialists as an unconventional war and clandestine operations unit — was killed in a targeted drone strike on Jan. 3, 2020, that was approved by Trump.

The U.S. Department of Defense blamed Soleimani for hundreds of deaths and injuries to Americans; he was purportedly killed while in neighboring Iraq while ''actively developing plans to attack American diplomats and service members in Iraq and throughout the region.''

Besides Trump, Rouhani referred to Secretary of State Mike Pompeo as the ''main perpetrators of this crime.''

"One of the effects of this stupid and disgraceful act was that Trumpism ended and in a few days, the life of this criminal will end and he will go to the dustbin of history, and we are very happy about this and we believe that the period after Trump will be a better condition for regional and global stability," Rouhani said.