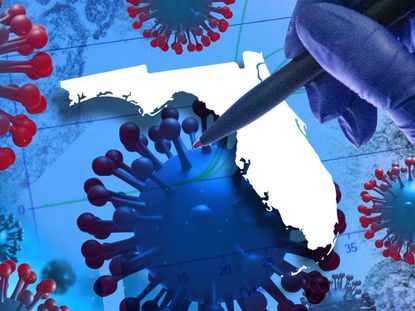 Revelers in Florida are continuing to party days after the New Year despite the state seeing five consecutive days of more than 10,000 new Covid cases.

Pictures show drinkers packed into beach bars in Fort Lauderdale with few of them wearing masks or observing social distancing. Other images from Miami show groups of people gathering on beaches and not wearing masks.

Hundreds of bikini-clad women were seen soaking up the sun at pool parties and on the beaches over the weekend despite rising fears about the virus.

It comes after the variant of COVID-19 that has swept through the United Kingdom - feared to be 70 per cent more transmissible and to spread more easily among children - was identified in Florida.

The Florida Health Department said on Twitter on Thursday that the case involved a male in his 20s in Martin County with no history of travel, meaning he caught it locally.

In Miami alone, thousands flocked to the beaches to soak up the sun for the New Year holiday weekend.

On Saturday, people were seen enjoying South Beach, as others flocked to a nearby hotel for a raucous pool party.

Palace Bar, Cafe Milano and Clevelander, which are all on Ocean Drive, were ordered to close for 24 hours by Miami Beach city officials.

According to a spokesperson for Miami Beach Code Enforcement, officials shut down the three bars and restaurants for 'violating the emergency order, which only allows establishments to play music and have entertainment at ambient levels'.