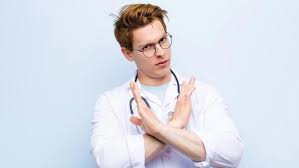 California's health workers are refusing to take the new COVID-19 vaccines - with over half of frontline workers at one hospital unwilling to take it, and between 20% and 50% of workers at other facilities who feel the same, according to the Los Angeles Times.

At St. Elizabeth Community Hospital in Tehama County, fewer than half of the 700 hospital workers eligible for the vaccine were willing to take the shot when it was first offered. At Providence Holy Cross Medical Center in Mission Hills, one in five frontline nurses and doctors have declined the shot. Roughly 20% to 40% of L.A. County's frontline workers who were offered the vaccine did the same, according to county public health officials.

So many frontline workers in Riverside County have refused the vaccine — an estimated 50% — that hospital and public officials met to strategize how best to distribute the unused doses, Public Health Director Kim Saruwatari said. -LA Times

Yet, as the Times notes, vaccine doubts among healthcare workers have come as a surprise to researchers, 'who assumed hospital staff would be among those most in tune with the scientific data backing the vaccines.'