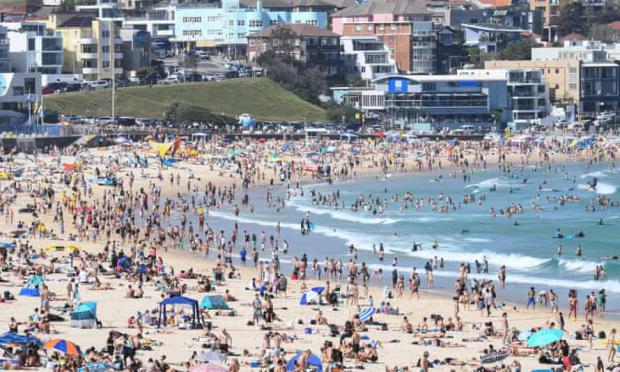 Beachgoers flocked to Sydney's beaches on a scorching hot summer day amid fears large holiday crowds could spark a surge in coronavirus cases.

Thousands of sun-seekers were seen cooling off at Sydney's Bondi Beach as the mercury hit 29C on Sunday.

NSW recorded only seven new cases of Covid-19 on Sunday after 24,000 tests were carried out overnight - but concern remains over a case of the virus at Bondi with no known links to the Northern Beaches cluster.

The crowds also follow NSW Police being forced to break up hundreds of revellers at nearby Bronte Beach on Christmas Day.

Health Minister Brad Hazzard slammed the group for not caring about the rest of Sydney and threatening the city with a coronavirus 'super-spreader' event.

Meanwhile in Melbourne, cricket fans took in the second day of the Boxing Day Test between Australia and India with spectators capped at 30,000 as part of the MCG's stringent Covid-safe measures.

Masked police patrolled the crowds as vocal fans of both sides mixed at Australia's largest stadium.

On Sunday morning, NSW Health authorities revealed one of the new cases was a pub worker who caught the virus three weeks ago.

All the new cases have been linked to Sydney's Northern Beaches, bringing the total to 122, but authorities are no closer to knowing the source of the outbreak.