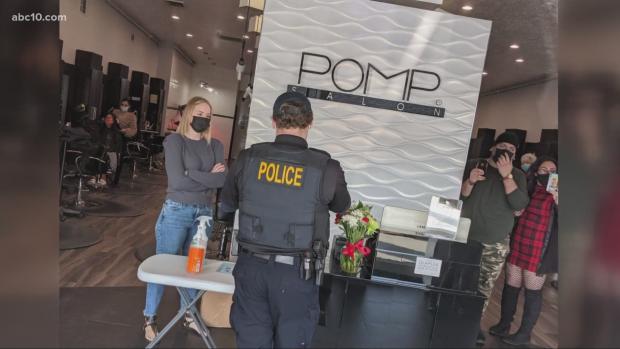 A California hair salon was raided by officers wearing body armor after ignoring restrictions to close down as a result of rising coronavirus infections in the state.

Armed officers from the enforcement division of the Department of Consumer Affairs marched into the Pomp Hair Salon in Stockton, east of San Francisco on Wednesday.

The seven-year-old salon was in full swing and packed with both customers and stylists alike as the business blatantly continued to ignore an order by the state's Board of Barbering and Cosmetology which required them to shut down several weeks ago, until at least the first week of January.

Vicki Kirk and Dino Ballin, husband and wife owners say it was a humiliating experience.

'About five armed state police officers burst into our salon shouting drop everything you're doing. Stop, you're being shut down,' said Kirk to ABC10.

'They burst into our salon and they treated it like a drug raid,' she said to Fox 40.

'It was one of the worst days of my life to have that scene happen in our salon when we are only trying to work.'

'If there were any evidence that we should close, we would close, absolutely. There is virtually zero evidence to support the closure of our industry,' Ballin stated.

'These stylists were promised assistance by the government that they never got. In some cases, some of my stylists downstairs, still to this day, have not gotten any assistance since March, since the closures in March,' he added.

1 Comments in Response to 'They treated it like a drug raid': California couple who refused to shut down their...

Time to make lots of money. If the reason was Covid disobedience, the money is sure. It might take a trick to handle it if it is for some other reason. FP has in the past published an article by or about the people at this site - https://awarriorcalls.com/urgent-message/. They are the way.