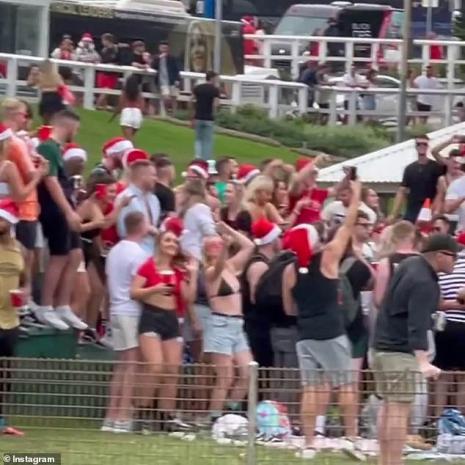 Riot police have been forced to break up a massive crowd of Christmas Day revellers partying at a popular Sydney beach.

Extraordinary scenes were captured at Bronte Beach in the city's east on Friday afternoon, where hundreds of Sydneysiders gathered to celebrate Christmas with friends, despite a coronavirus outbreak which continues to spread across the city.

Footage has emerged showing revellers at Bronte wearing festive Santa hats, dancing closely together and on each others' shoulders in a large crowd, as the Sydney outbreak grew to 118 confirmed cases.

No face masks could be seen and social distancing was non-existent.

Health Minister Brad Hazzard has slammed the group as 'ignorant' for potentially spreading the deadly disease.

'I get the desire for youthful Christmas exuberance, but this is as irresponsible, ignorant and idiotic as it gets,' he told the Daily Telegraph.

'It's a massive potential COVID-19 incubator.'

Social media users have also expressed anger over the footage as many families have been forced apart due to the latest outbreak.

'Not sure these peeps got the COVID memo,' a concerned local captioned a video of the disturbing scenes.