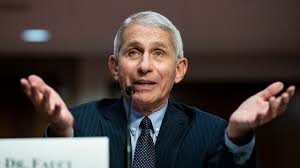 At issue is the percentage of the population which must require resistance to the coronavirus - through infection or vaccination - in order for the disease to disappear.

Early into the pandemic, Fauci repeatedly claimed '60-70%' herd immunity was required to achieve herd immunity. Beginning around a month ago, however, Fauci's estimate drifted higher - to "70, 75 percent," and more recently telling CNBC "75, 80, 85 percent" and "75 to 80-plus percent."

When asked about it, Fauci essentially said he lied for political purposes due to vaccine skeptics.

In a telephone interview the next day, Dr. Fauci acknowledged that he had slowly but deliberately been moving the goal posts. He is doing so, he said, partly based on new science, and partly on his gut feeling that the country is finally ready to hear what he really thinks.

Hard as it may be to hear, he said, he believes that it may take close to 90 percent immunity to bring the virus to a halt — almost as much as is needed to stop a measles outbreak.

Asked about Dr. Fauci's conclusions, prominent epidemiologists said that he might be proven right. The early range of 60 to 70 percent was almost undoubtedly too low, they said, and the virus is becoming more transmissible, so it will take greater herd immunity to stop it.

Dr. Fauci said that weeks ago, he had hesitated to publicly raise his estimate because many Americans seemed hesitant about vaccines, which they would need to accept almost universally in order for the country to achieve herd immunity.

And with polls now suggesting more Americans are willing to take the vaccines, Fauci (who said in November COVID-19 'won't be a pandemic for much longer') says he's ready to come clean.