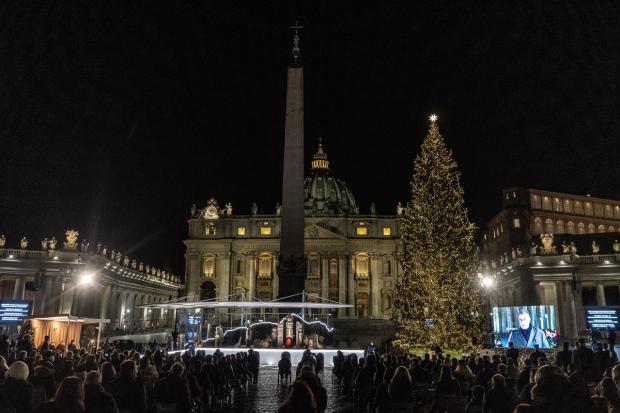 And just like everything that is constructed by man's hands without God's blessing, indeed against Him, it is destined to perish, to disappear, and to crumble.

At the center of Saint Peter's Square, a metallic tensile structure dominates the scene, hastily decorated with a tubular light, underneath which stand, disturbing as totems, a few horrible statues that no one endowed with common sense would dare to identify with the characters of the Nativity. The solemn background of the Vatican Basilica only serves to augment the abyss between the harmonious Renaissance architecture and the indecorous parade of anthropomorphic bowling pins.

It matters little that these atrocious artifacts are the fruit of students of an obscure Abruzzo art institute: whoever dared to put together this affront to the Nativity did so in an era that, besides creating countless monstrosities of pseudo-art, did not know how to make anything beautiful or that merits to be preserved for posterity. Our museums and modern art galleries are overflowing with creations, installations, and provocations born from sick minds that straddle the Sixties and Seventies: paintings that are impossible to look at, sculptures that cause disgust, works of which it is impossible to determine either their subject or their significance. Nor were the churches spared: even they are overflowing with such works, always stemming from those unpropitious years, impudent contaminations produced by "artists" appreciated more for their ideological and political affiliation than for their talent.