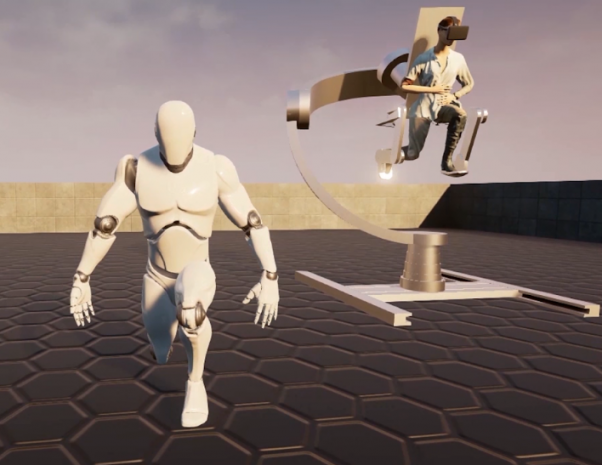 But it ain't an easy problem to solve. As we interact with the world, so the world interacts with us, and to truly feel like we're physically inhabiting a virtual world, or to accurately control a robotic telepresence somewhere else on the planet, the virtual world needs to be able to exert forces on the body even as we operate against it. When you punch a wall, your hand has to stop.

When you push against something, you need to feel the resistance. A VR exosuit needs to perfectly measure how much force you're exerting, while exerting an appropriate force in reverse – at any angle, on any part of the body. It's a hardware nightmare.

Leaving aside the billion-dollar holy grail of virtual sex you can actually feel, let's take a look at how one German company is trying to replicate the simple physical experience of walking with a force-feedback lower-body exoskeleton. Dr. Marcel Reese says he's prototyped the first working system for force feedback and balance feedback as you walk in VR.

The Holotron, as he calls it, starts out by suspending you off the floor, meaning it can decide where the floor is in the virtual world, and what angle, and how it's moving. It also lets you feel a certain facsimile of physical movement when you jump or get thrown into the air.

Your legs are placed into a beefy frame covered with motors and sensors, which Reese says operate in low latency to track your leg movements while delivering resistance and force motion where appropriate. If a big ball rolls into your leg, it'll knock your leg backwards. A set strength limit of 150 Nm represents 25 percent of the force the suit could exert on a user, and anything outside those limits will cause the body to go briefly out of sync with the virtual world until it catches up again.