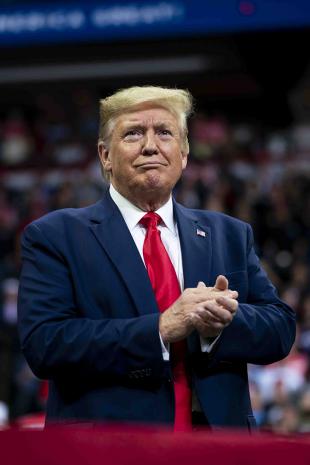 Mr. Trump made the announcement on the social media service Twitter in a post touting an article written about a report White House trade adviser Peter Navarro recently published regarding the election.

"A great report by Peter," Mr. Trump said on Twitter. "Statistically impossible to have lost the 2020 Election," Mr. Trump claimed. "Big protest in D.C. on January 6th. Be there, will be wild!"

Millions of more Americans cast ballots for Mr. Biden than Mr. Trump, paving the way for the president's Democratic challenger to succeed him next month when he is sworn in on Inauguration Day, Jan. 20.

However, first Congress will hold a joint session on Jan. 6, when its members will meet on Capitol Hill to count and confirm the results of the Electoral College and make official the election's outcome.

Mr. Trump did not include any further information in his tweet about the planned protest.

Thousands of Trump supporters have participated in previous demonstrations held in D.C. to protest his loss to Mr. Biden in the weeks since the White House race ended with the president's defeat.