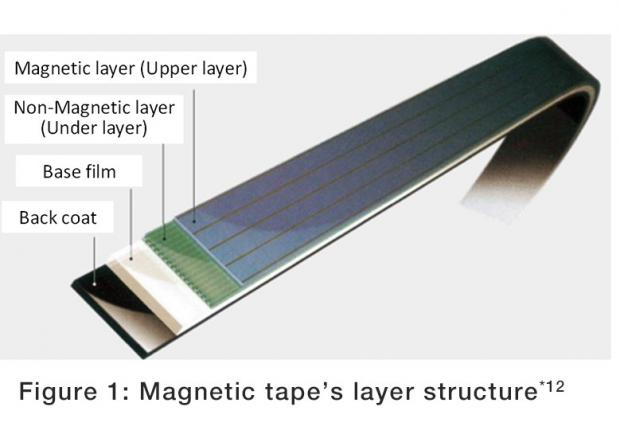 Other media have come and gone, but magnetic tape has been the go-to storage medium ever since its invention in 1952. That's thanks to its durability, density, low cost, longevity, energy efficiency and scalability – but all of these stats have of course improved over the decades.

The newest prototype cartridge manages to squeeze in 317 Gigabits per square inch (6.45 sq cm) of tape, which is just 4.3 micrometers thick and 1.3 km (0.8 miles) long if you were to unroll it. That adds up to a huge total data capacity of around 580 TB, which marks quite an improvement over IBM's previous record from 2017, when it and Sony produced a cartridge of 201 Gigabits/in2 for a capacity of 330 TB.

The main improvement that allowed for the new record was the new tape material developed by Fujifilm. Most current tapes are coated in magnetic particles of barium ferrite (BaFe), but this time the company used a new type of particle called strontium ferrite (SrFe). These new particles take up 60 percent less physical space than BaFe particles, allowing more of them to be crammed into a section of tape. A new non-magnetic under layer also improves the smoothness of the tape, allowing the read/write head to get in closer.

IBM's role in the prototype was to develop these read/write heads, as well as the actuators and servos that control them. The company says that the new developments allow the heads to be positioned to within 3.2 nm, a world record for accuracy.

These tape cartridges would be particularly useful for data centers, which are vital for handling the ever-increasing amount of data generated, processed, stored and transferred around the world.