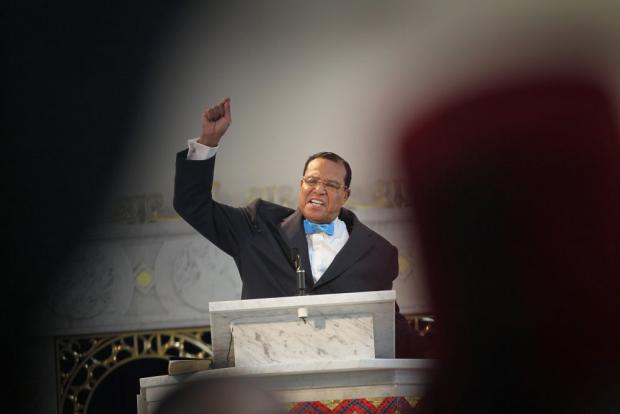 Nation of Islam leader Louis Farrakhan has called the coronavirus vaccine 'a free shot of toxic waste' in a speech urging his followers not to take it.

Farrakhan, 87, was speaking virtually at the National Afrikan/Black Leadership Summit on Saturday when he made the comments.

The vaccine roll out began across the United States Monday, with intensive care nurse Sandra Lindsay in New York among the first to receive the Pfizer shot on the day the death toll from the virus hit 300,000.

But Farrakhan, whose allegedly anti-Semitic, anti-white and anti-gay comments have previously prompted the Anti-Defamation League and the Southern Poverty Law Center to label him an extremist, said: 'We are so frightened over this Covid, now they're getting us ready for this vaccine.

'Do you believe satan is concerned about vaccinating you? You trust him? After all he has done to destroy us? How could you allow him to stick a needle into you, saying he's helping you?

'Those of you who are health professionals, they want you to take it first. You notice they're offering you money now? This devil…offers you $1,000 or $1,500 to take a shot. They give you free shots of toxic waste.'

A poll released last week already shows less than a quarter of black Americans plan to get vaccinated.  Black Americans are particularly wary of the shot, despite the fact that they've suffered a disproportionate share of the US's coronavirus deaths.