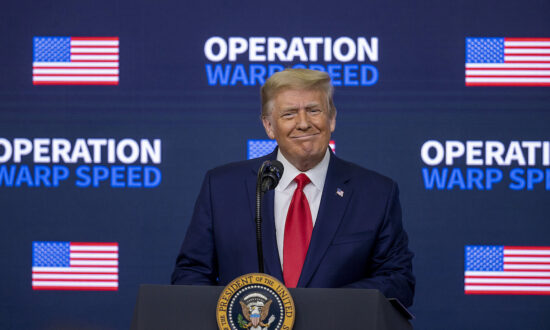 President Donald Trump hailed a "medical miracle" after the Food and Drug Administration (FDA) late on Friday authorized a vaccine from Pfizer and its German partner BioNTech for emergency use in efforts to end the pandemic caused by the CCP virus.

"Today our nation has achieved a medical miracle. We have delivered a safe and effective vaccine in just nine months," Trump announced in a three-minute address to the nation.

"This is one of the greatest scientific accomplishments in history. It will save millions of lives and soon end the pandemic once and for all. … On behalf of the American people I'd like to thank all of the brilliant scientists, technicians, doctors, and workers who made this all possible."

"The United States is the first nation in the world to produce a verifiably safe and effective vaccine," the president said, adding that the first vaccine will be administered in less than 24 hours, and that doses are being shipped to all U.S. states. State governors are expected to decide who can receive the vaccine first, he noted.

The president said that his administration had provided some $14 billion through Operation Warp Speed—a public-private effort to fast-track the development and manufacturing of all of the top COVID-19 vaccine candidates in advance.

"This included a nearly $2 billion investment in Pfizer to produce 100 million doses of their vaccine with an option to produce 500 million additional doses, and I'm proud to say we have made sure that this vaccine will be free for all Americans," he said.