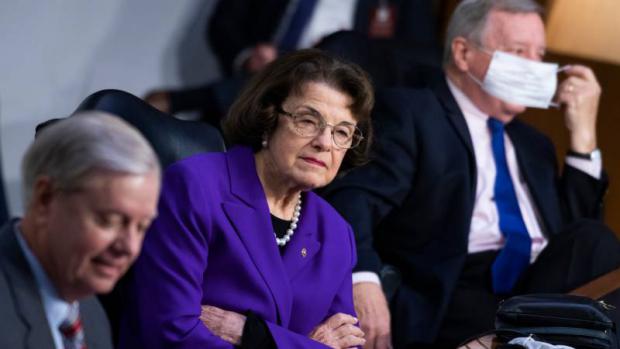 California Sen. Dianne Feinstein, the oldest member of the Senate, is defending her work habits and effectiveness – after reports of excruciating conversations with fellow Democrats about her ability to perform her duties.

'I do. I work hard. I have good staff. I think I am productive. And I represent the people of California as well as I possibly can,' the 87-year old former mayor of San Francisco told CNN, asked if she could carry out her duties.

The soft-spoken Feinstein said she didn't find a devastating New Yorker profile of her fair.

'No, not particularly. No one talked to me,' she said, although the piece reported that her staff had declined to comment.

She notably would not commit to filling out her term, which expires in four years, just weeks after fellow Democrats forced her to relinquish the chair of the Judiciary Committee.

Feinstein gave up the powerful post despite her seniority following blowback from her handling of the hearings that resulted in the confirmation of Supreme Court Justice Amy Coney Barrett.

She is not the first senator to serve long after some colleagues believed she was in her prime.

Minority Leader Chuck Schumer had several 'painful' conversations with Feinstein, the oldest serving senator, about stepping aside during those hearings. But Feinstein 'seemed to forget' about their talks, according to the article.