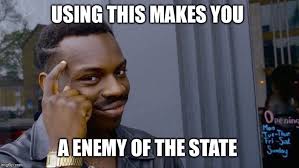 The corruption is so immense, and so prevalent even at the local level, that it cannot be confronted by anything less than hundreds of thousands of coordinated opponents.

This situation has always existed. Think of the very accurate old canard "You can't fight city hall." The difference is that now the tyranny has grown well beyond crass political rivalries or even feuds between organized crime families. The mafia and more recent offshoot intercity gangs at least have some kind of twisted code, and lines they won't cross. The elite that rule us appear to have no such lines.

The entire world was basically shut down in March of this year, over an alleged deadly virus. There were no overt signs that something dangerous was afoot. No bodies being carted away, and death visiting every family, ala the Great Plague that wiped out so many in Europe centuries ago. Most of us personally knew no victims. And yet all were quarantined to some degree. As a few critics pointed out, you don't quarantine healthy people. Well, not until now. Sports, movies, churches, and schools were cancelled. Millions lost their jobs. The public donned ridiculous masks and followed "social distancing" rules that have no scientific basis.