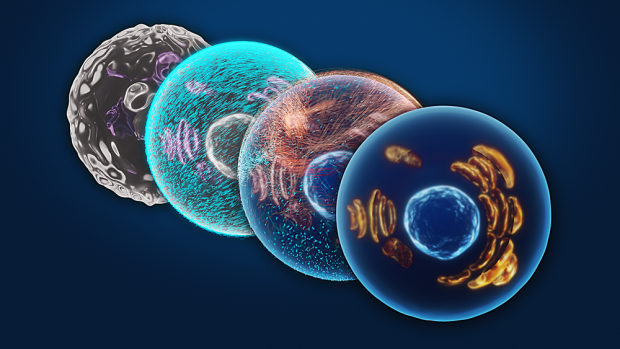 Above – When mesenchymal stem/stromal cells (MSCs) age, the transcription factor GATA6 is increasingly produced in the cell to induce aging response. By transcription factor-based cellular reprogramming, aged MSCs are rejuvenated with a reduction in GATA6 effects on cellular aging. CREDIT AlphaMed Press

University of Wisconsin-Madison researchers found that the expression of GATA6, a protein that plays an important role in gut, lung and heart development, was repressed in the reprogrammed cells compared to the control cells. This repression led to an increase in the activity of a protein essential to embryonic development called sonic hedgehog (SHH) as well as the expression level of yet another protein, FOXP1, necessary for proper development of the brain, heart and lung. "Thus, we identified the GATA6/SHH/FOXP1 pathway as a key mechanism that regulates MSC aging and rejuvenation," Dr. Li said.

To determine which of the Yamanaka transcription factors (four reprogramming genes used to derive iPSCs) were involved in repressing GATA6 in the iPSCs, the team analyzed GATA6 expression in response to the knockdown of each factor. This yielded the information that only OCT4 and KLF4 are able to regulate GATA6 activity, a finding consistent with that of several previous studies.

"Overall, we were able to demonstrate that SF-MSCs undergo substantial changes in properties and functions as a result of cellular reprogramming. These changes in iPSC-MSCs collectively indicate amelioration of cell aging. Most significantly, we were able to identify the GATA6/SHH/FOXP1 signaling pathway as an underlying mechanism that controls cell aging-related activities," Dr. Li said.