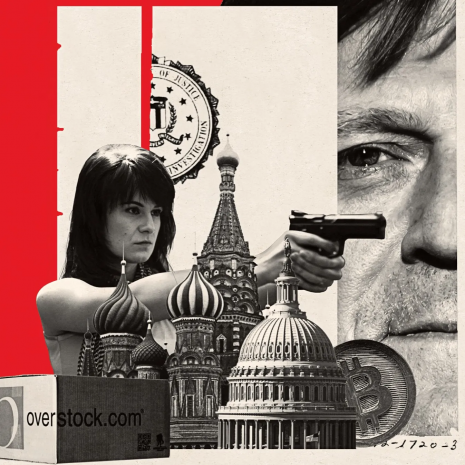 "There are basically two different realities emerging," Byrne said. "And, unfortunately, the truth is not really either of them."

In July, 2015, Patrick Byrne, the founder of the online discount retailer Overstock, delivered a twenty-minute talk at FreedomFest, the annual libertarian conference in Las Vegas. Other speakers included the venture capitalist Peter Thiel; John Mackey, the chief executive officer of Whole Foods; and the Presidential candidate Donald J. Trump. Byrne's talk, entitled "Turtles All the Way Down: How the Crypto-Revolution Solves Intractable Problems on Wall Street," was a version of one he had given many times before. It touched on several of his interests, including the kind of liberalism usually referred to as libertarianism, the flaws in the structure of the stock market which make it vulnerable to manipulation, and how a blockchain-based financial system could eliminate those flaws. After the talk, a line of people waited by the stage to speak to Byrne. Standing a little apart from them was a young woman with thick red hair, a pale, wide face, and a Russian accent. Introducing herself as Maria Butina, she said that she was the president of a Russian gun-rights group. Judd Bagley, a former Overstock executive who accompanied Byrne to the conference, recalled that, after the exchange, Byrne had "a little sparkle in his eye."

At the time, many people in the business world considered Byrne to be an almost clairvoyant entrepreneur. In early 2000, years before Amazon and eBay popularized the practice known as "dropshipping," Overstock, which sells furniture and household goods, allowed third-party venders to send items directly to customers through its Web site. In 2004, a year before Amazon Prime was introduced, Byrne launched Overstock's Club O membership program, which gave shoppers a year's worth of shipping for a flat fee. And in 2014 Overstock became the first major retailer to accept bitcoin for purchases.

Byrne is the son of John J. Byrne, an insurance magnate whom Warren Buffett, a family friend, once called "the Babe Ruth of insurance." Patrick Byrne has a Ph.D. in philosophy from Stanford and regularly cites Friedrich Hayek, Martin Luther King, Jr., and the conservative economist Thomas Sowell in conversation. Former employees describe a memory trick he likes to perform, in which he studies a deck of cards for a few minutes and then recites back the order of the cards, one by one. "When he's on, he's smart, charming, complex, and brilliant," Marc Cohodes, who was once a critic of Overstock and is now an investor in the company, told me. Byrne is also a showman; in 2014, he arrived at the breaking-ground ceremony for Overstock's new headquarters, in the suburbs of Salt Lake City, by parachute, tearing off his flight suit to reveal a tuxedo.

Byrne was best known for waging a sensational legal battle with several investment firms and stock traders in the early two-thousands. He accused them of colluding to drive down the stock prices of various companies, including his own—a claim that seemed unlikely, even preposterous. He was mocked for the outlandish, bullying ways in which he presented his findings. "Everyone said for years, 'Patrick Byrne is crazy,' " John Welborn, an economics lecturer at Dartmouth College who has worked as a consultant for Byrne, told me. But, shortly after the financial crisis began, Byrne's suspicions were confirmed, and regulators soon cracked down on the practice he'd described.