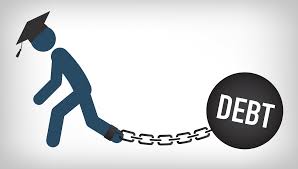 This is the first of many deceptions baked into coverage of one of the more misunderstood and misreported issues of our time. Student loans matter to older people, too. In fact, that's the problem. They matter far too much, to too many older people.

"People that are 45 years and older, that's where the student loan problem is a real issue," says "Chris," who took out his first loan in 1981. "Because those are the people that normally would have the highest balances."

Now 59, Chris asks to tell his story under a pseudonym, to protect the service industry career he's built in part with the hope of someday escaping his student debt.

It's often argued that forgiving student debt would unfairly punish other groups, particularly those who "did the right thing" and paid off their loans. In truth, political changes have already punished plenty of student loan holders. Chris is a prime example.

He grew up in the Midwest, and began studying philosophy and political science at Southwest Missouri State (now called Missouri State) in 1980. He began paying for his undergrad studies upfront, a decision that would have fateful consequences. He entered school just as Americans were electing Ronald Reagan, who wanted to dramatically re-order federal spending priorities. Among his first acts: raising the interest rates for some federally-guaranteed student loans from 7% to 9%.