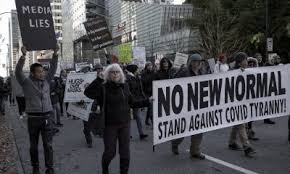 Colorado officials last week announced that several counties had moved into the "red level"—the second-highest measurement on its COVID-19 dial—and would be forced to implement new regulations on restaurants, gyms, and other parts of the economy to combat the virus.

Then something remarkable happened. Weld County, a county in the northern part of the state with a population of roughly a quarter million people, politely said no.

"Instead, county government continues to do what it has done since March, which is promote and encourage residents and business owners to take individual responsibility and make decisions to protect themselves, their families, their community and their businesses," the Board of Commissioners said in a statement.

With a test-positivity rate north of 16 percent, Weld County's infection rate is well above the 5 percent threshold the World Health Organization uses as a benchmark for taking proactive measures to limit the spread of the virus. Nevertheless, county officials enumerated what they would not do.