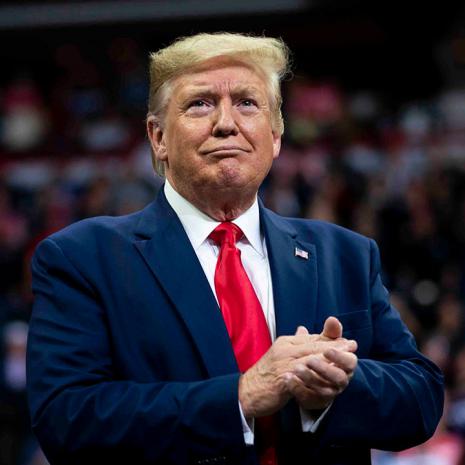 Donald Trump is said to be considering holding an event during the president-elect's inauguration to announce his 2024 run and has boasted that he thinks the networks will continue to cover him after he leaves the White House because Joe Biden is 'boring'.

Three sources close to the president told The Daily Beast he is plotting various ways to boycott Biden's administration and steal his thunder when he is sworn in as the 46th president of the United States in January.

Two of the sources said Trump is considering timing a kick-off event for his 2024 White House campaign to clash with inauguration week or with the ceremony itself.

This would be a marked departure from protocol with the outgoing president traditionally attending the incoming president's inauguration as part of a peaceful transition of power - a grace then-President Barack Obama and Vice President Biden both afforded Trump back in 2017.

It comes as Trump took a break from his election legal battle over Thanksgiving weekend to play a round of golf at his club in Sterling, Virginia, Saturday for the second day in a row.

He saluted and sported a 'MAGA hat' as he disembarked Marine One at the Trump National Golf Club, with his sons Eric and Don Jr. and Don Jr.'s girlfriend Kimberley Guilfoyle in tow.

Don Jr. on Wednesday claimed he was 'cleared' of COVID-19 in time for Thanksgiving, despite only announcing his infection the Friday before.

The Trump family celebrated the Thanksgiving holiday at Camp David with all the president's adult children pictured at the presidential retreat Friday ahead of their father flying in after his golf game. It is not clear if Barron and First Lady Melania Trump joined them.