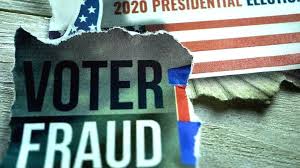 "We have clear evidence that they are targeting certain congressmen. I believe they are going to find two Republicans. I think it's going to turn out that one of these Republicans at a State level may have got "election insurance". The promise they would keep being elected. The sum involved to purchase Dominion machines was $100 million.

"Every state that uses Dominion — we should investigate who signed the order to bring it in. No one who did due diligence would.

"Call your state legislature — send them this video –Anyone who signs these "Cert" forms should go to jail. They have personal legal liability.

Details of the technique plus "more coming out tomorrow":

The five city "Drop and Roll" technique of vote fraud

In the Drop and roll technique, they shut the voting down, calculate what they need, then drop a batch in to "Catch up". After that they roll out for example, 53 batches in a row and each batch measures exactly 51.2% for Biden and 48.8% for Trump and they roll that difference forward. All this will be released tomorrow.

The five cities where the deep cheating went on:    Atlanta, Philadelphia, Milwaukee, Detroit, and Maracopa County, Arizona. They hide behind black regions so then they will call you a racist if you question it.