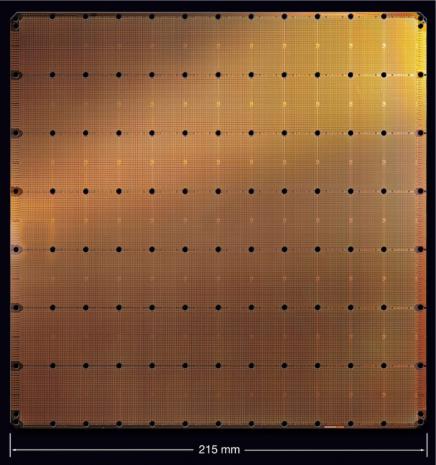 They had 0.86 PetaFLOPS of performance on the single wafer system.

The problem was to solve a large, sparse, structured system of linear equations of the sort that arises in modeling physical phenomena—like fluid dynamics—using a finite-volume method on a regular three-dimensional mesh. Solving these equations is fundamental to such efforts as forecasting the weather; finding the best shape for an airplane's wing; predicting the temperatures and the radiation levels in a nuclear power plant; modeling combustion in a coal-burning power plant; and or making pictures of the layers of sedimentary rock in places likely to contain oil and gas.

The massive speedup was enabled by:

1. The memory performance on the CS-1.
2. The high bandwidth and low latency of the CS-1's on-wafer communication fabric.
3. A processor architecture optimized for high bandwidth computing.

Cerebras CS-1 has the world's largest chip. It is 72 square inches (462 cm2) and the largest square that can be cut from a 300 mm wafer. The chip is about 60 times the size of a large conventional chip like a CPU or GPU. It provides much-needed breakthrough in computer performance for deep learning.

They have delivered CS-1 systems to customers around the world, where they are providing an otherwise impossible speed boost to leading-edge AI applications in fields ranging from drug design to astronomy, particle physics to supply chain optimization, to name just a few applications.