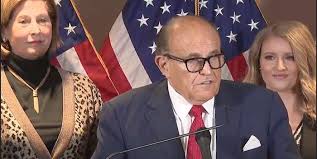 From everything I've studied, the amount of vote-fraud is titanic. Court cases are obviously necessary.

I want to read Sidney's filings. I want to see the progress of cases through the courts.

But after the monster press conference yesterday, during which Rudy Giuliani, Sidney, and surprise star Jenna Ellis spoke, I believe I understand what's really going on here. Ultimately, it has nothing to do with Sidney. I'll speak to that in a minute.

First, the press conference was a hell of an event. Rudy broke through and hit home runs out of the park. Sidney made a stalwart presentation. Jenna Ellis, legal advisor to Trump, served up MAJOR high heat to the gathered press.

She hammered on the distinction between an opening presentation (the press conference) and a court trial, in which evidence is presented in detail.

She told the press they wouldn't even accurately report this very press conference the next day. Her tone was iron conviction heated in a forge.

You don't learn that in school or in a courtroom. It comes from someplace else.

Rudy took the reporters to school. He told them their claims of "lack of evidence" for fraud were ridiculous. Affidavits are evidence. He waved a list of sworn statements at them, from on-site witnesses, which asserted:

Sidney spoke about Dominion Voting Systems, Smartmatic, and their Swiss Cheese software with back doors. The easy opportunities for hacking into machines. The algorithm set up to flip votes from Trump to Biden.

Jenna said a prosecutor could take days to prepare a case about a single crime that was committed during the course of a few minutes. Here, the lawyers were dealing with a case that stretched out across a massive amount of space, and went back in time.

AND THAT IS THE PROBLEM.